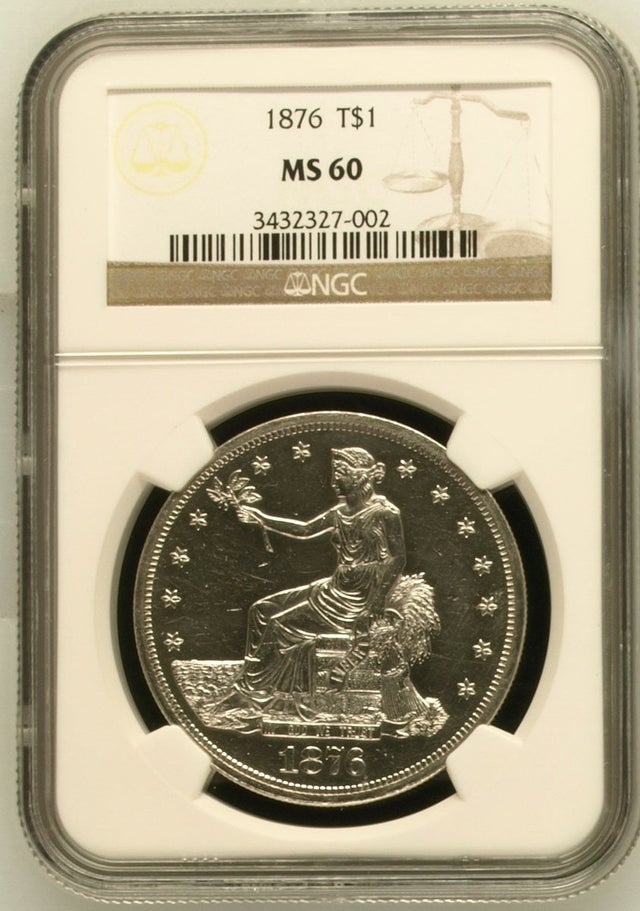 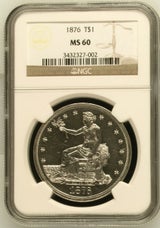 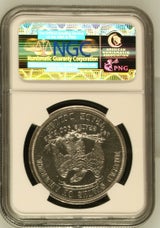 The US Trade Dollar has a fantastic history and is one of my personal favorites to collect. The trend for US Trade Dollars in almost all grades has been a steady upward trend. Many Trade Dollars are "chop marked", cleaned or have damage. The population of these coins that are NGC certified MS 60 or higher was under 400 coins in total as of the time of this listing.

A new obverse hub was introduced this year. It is distinguished easily by the lower end of Liberty's banner, which points to the left on Type 1 dies and downward on Type 2 dies. Less obvious is that Liberty's outstretched right hand, which formerly seemed to have just four fingers, has had a tiny addition made to it. The Type 1 obverse was paired with both the Type 1 and Type 2 reverse dies, while the new obverse is known only with the new reverse. This last combination is quite scarce for 1876(P). This is perhaps the most common Philadelphia Mint trade dollar issue in Mint State, and this is certainly true at the higher grades. It's quite possible that a certain number were purchased and preserved by tourists who traveled to Philadelphia that year to attend the nation's centennial exposition. The U. S. Mint was a popular destination that summer, as evidenced by an obvious boost in proof coin sales. Despite the devaluation of the greenback currency issued since 1862, silver coins had continued to circulate in the western states and territories throughout the 1860s and '70s, as paper money was shunned there. But for Americans living in most of the nation, the year 1876 witnessed the welcome return of silver to general circulation, since the falling price of silver permitted federal notes to achieve value parity with silver coins. Trade dollars had been granted legal tender up to five dollars when legislated in 1873, but they had mostly been exported to the Far East, as intended. In this year, however, the drop in silver prices was sufficient to prompt a huge advance in trade dollar production for the primary purpose of placing them into circulation at their face value. Since the coins were struck to order at their bullion value, this resulted in an instant profit. To combat this abuse, Congress repealed the trade dollar's legal tender status on July 22, 1876, but this simply aggravated the situation. Now, trade dollars could be refused in commerce, with those holding them having no recourse but to sell them to bullion brokers at a discount. Eventually, this would lead to the coin's early demise.1876 Trade Dollar ValueAccording to the NGC Price Guide, as of August 2022, a Trade Dollar from 1876 in circulated condition is worth between $95 and $840. However, on the open market 1876 Silver Dollars in pristine, uncirculated condition sell for as much as $73500.